March is a tough month for high school Seniors and counselors.  After spending many months in the fall creating the best personal statement and application possible, and after shelling out hundreds of dollars on applications, testing and writing coaches, and meeting with counselors, Seniors wait.  We wait to see if we made the best decisions not only for the list of colleges, but in the last four years.

Many college-bound seniors (and their parents) have been biting their nails for the last several months in the hopes that something positive will arrive in the mail from a school of their choice. As a school counselor (and college counselor/crisis counselor/career adviser and everything in between thanks to budget cuts), I am definitely stressed out. I worry about whether I did or did not provide adequate guidance to my charges on where they have the best chances of getting in based on their capabilities and on their academic and extracurricular profile. April comes around and we all get decisions, good or bad. 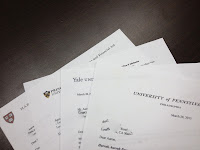 Having been an undergraduate application reader, scholarship application reader and chair (for a couple of organizations), I get the opportunity to see what kind of applicant is applying (and getting accepted) to which schools. It really helps me take the guess work out of advising students.  Also, knowing which of my students from previous years get accepted (and actually love the college where they matriculate) helps me when I work with students, not only in the public school but in my private practice.  It is not easy.  Especially when not every student is the same.

One student (not the student that boasts the above acceptances), bummed that he was rejected from top UC's and private schools, came in to my office and asked me "what did I do wrong?" in referring to his last four years of school. He has a solid and competitive GPA, involved in multiple sports, activities and religion.  His work would certainly allow him to succeed at even the top schools. And he didn't get in. He did get in to a highly selective California Polytechnic school and another UC.  It was heartbreaking to see rejection on his face. I emphasized that the two schools where he was accepted would probably be a blessing in disguise: small class sizes and many more perks not necessarily offered at the other schools that rejected him.

I realize now what my mistake was in advising this particular student that was accepted to two (very good schools) and rejected from five.  He applied to schools where he (we) believed strongly that he would get in, and he did. The rest of the schools were "reach for the stars". I should have emphasized that part more. His list of schools was lopsided, not strategic, and I rarely recommend that. I used my respect and appreciation for the kid (and his awesome family) to overshadow the objective way I usually advise students (sometimes like how parents "advise" their child and are surprised when I shoot them down). I answered his question about what he did wrong with just this: He was a competitive candidate, but we tried too hard to "shoot for the stars".

Then, while reading the Wall Street Journal last week, I found this "satirical" opinion piece from a high school student. The op-ed piece pissed me off. Then I felt sorry for her (and a bit envious of the great education at a blue ribbon school in a very wealthy neighborhood). I was angry not only in the defense of admissions officers that I know work their rear-end off finding the "perfect" freshman class, but also at the advising she did or didn't get from either her private counselor or from her school (college) counselor. Why was this young lady angry at the schools and not herself?

"Colleges tell you, "Just be yourself." That is great advice, as long as yourself has nine extracurriculars, six leadership positions, three varsity sports, killer SAT scores and two moms. Then by all means, be yourself! If you work at a local pizza shop and are the slowest person on the cross-country team, consider taking your business elsewhere."

This whole "be yourself" idea is as old as the "apply broadly" or " schools want a well-rounded kid" myths.  Why are counselors not debunking these myths?  Why didn't someone advise her to apply strategically and, more importantly, realistically, so that her rejection pile was smaller than her acceptance pile (or at least that she got into a school that made her happy)?  If her counselor did recommend that, who told her not to listen? It's not like application fees are cheap with each application costing upwards of $70!  Why didn't she speak with the admissions officers that came to either visit her school or her state? With resources and connections to get posted in the WSJ, why didn't she find the resources to visit schools and get a better feel of the students on campus?

The collegeboard.org and other statistically driven websites help students see where their GPA and test scores will place them in the applicant pool. This takes the mystery out of the academic part of applying.  Other sites (and even admissions officers) will share with you how much importance they place on leadership and extracurricular activities. If she boasts a competitive GPA and test scores, did she look for schools that exclusively place more importance on those numbers?  Who in the heck was advising her with all of this?

Poor Suzy on the other hand, has displaced satirical anger towards the school's admissions officer and blaming her lack of "diversity" for her rejection.  She also fails to understand that her lack of "diversity" was her "lazy" fault albeit being a good writer. A college isn't always looking for ethnic diversity, they are also looking for diversity in thought, creativity and experience. Why didn't anyone explain this to her? Why is she using the same boring (and pathetically old) thought about admissions being the color of an applicant's skin? Who taught her this?  There is still a disproportionate advantage based on the color of one's skin on university campuses across the country-and it's NOT in favor of darker skin.  Others have so eloquently described this viewpoint in a much better way than I probably would.

Saudi Garcia writes: "Hidden behind these remarks about racial diversity are the histories of injustice, structural racism, prejudice, educational disadvantage, and chronic under-resourcing that affect the populations in question. While, for example, Chicago plans to close public schools and force even more students into an abject, unequal education with little hopes of ever going to college, the fairy godmother of diversity will wave their obstacles into non-existence by delivering a magic carriage of college prep courses and a glass slipper of generous advising. Right? Wrong. And Wrong."

Why didn't she get her group of lazy friends together to talk about reality TV shows or something where she was able to at least help the admissions officer see some form of originality? What constructive activities did she do with her time other than use her connections to get posted in the Wall Street Journal?  Colleges care that you care about yourself and your community-whatever it is! Why do they care? Who do you think will help continue to make the school a better place? Who will initiate student leadership and calling for change, from a student's perspective, on the school's campus? Who will continue the many "student initiated" programs on campus? Certainly not administrators.

Why didn't someone explain this to her?

If "being yourself" is being lazy, then yes, few schools (especially Ivy Leagues) will accept you, no matter what your GPA or test scores look like. There have been much speculation about whether or not the U.S. undergraduate admissions system needs an overhaul and many people may share this sentiment. Although I mildly agree, there are so many facets considered when an applicant is looked at from an admissions officer.  And freshman class sizes on campus have increased (as have the applicant pool), not decreased,  in the last several decades.


Students not sharing some form of originality will be on that long list of rejected applicants no matter how many calls the counselor makes on the student's behalf.  I am not entirely sure as to whether this opinion piece was her way to share "new information" to a school, for a decision she was trying to appeal, or whether it was just a rant that happened to be published because of her sister's connections at the WSJ.  If I read this letter and this student tried to appeal to my school, I would most certainly still reject the application, again. It would be an outrage if this child got in to college over someone that actually cared about other people and their community.  I'm sure one school would want this student, but it's probably not the school she wanted to attend because it's not an Ivy League or at the top of the list from US News and World Report.

counselorgarza@gmail.com
Posted by Marlene at 4:44 PM 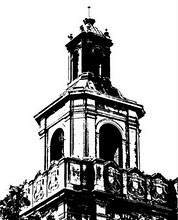